Your Favourite Games Are Half-Assed 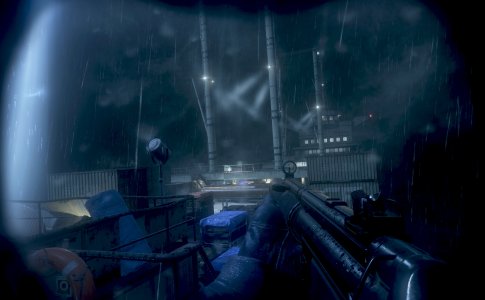 Now where did I put my stash...​
I rarely play singleplayer games, but I still fondly remember playing Call of Duty 4 All Ghillied Up. As I navigated the dark corridors I remember thinking, "I really don't like dogs" as the killer dogs nearly tore me from limb from limb. I like the samurai-like nature of the game and having to navigate past dangerous patrols, through the deep atmosphere. I'm saying that because that year had some of the highest rated games of all time, which is staggering when compared to our landscape of games today which mainly boil down to mediocre QTE loops with games on the side.


When I think about games today, all of my thoughts go back to sheer fun game design, and Call of Duty 4. A game that I fondly recall and enjoy, because it was like the games industry ended on a cliffhanger with that game. I'll now proceed to explain:

Years ago I viewed the gaming future with jokes about how devs would strive for realism to the extent that everything is mediocre, and nothing is distinct. I believe we're here! WooHoo! Congrats on boring up the games industry.

I'm familiar with the 00s games industry, which was informally 'formed' by nerds who, if not sought, then were open to co-operation. It was much less about testing and research (ie safety) and more about ideas, experimentation, and the vehicle that is the game. It's about FUN rather than feel. Working together to free people from being bored. The accomplishment, not about the sheer inevitability of population = audience => game*.

This is potentially the most rewarding time to be a game developer. It isn't, but it POTENTIALLY is. This is THE best way developing anything, without question. Free of 'grind', and a lack of obstacles for the audience, or fun.

It's not about the game itself, but about the commitment to the end result.

When contrasted with the modern precedence - the modern environment following the whims of publishers becomes very apparent. At the moment the shoe is on the other foot. Mediocrity is rife in an overly capitalist environment. As much as however the state of finance in the games industry is just as important*, regardless - if I review a game, I usually hope for a high quality game that isn't a rebrand of an old title. A lot of good titles come out regularly, not great. The difference here is that none are seen through to the final idea, or else the innovation in the games industry would be a lot higher. While it's encouraging the European Union is slowly fixing the games we get. As it stands, none reach even an eighth of the quality of Call of Duty 4, which is why I write about that rather than Shovel Knight.

So thinking back to Call of Duty 4. Call of Duty was the archetype and precedent for all shooting games that followed. Objectives, gameplay, soundtrack and level design all unified into a cohesive, yet diverse work which showed the nuance of both real life as well as the history of FPS games. And it was one of the most balanced games I have played to date. I love and played the hell out of CoD, and it was not generic like many other shooters were. Since then, it's been the staple. Background - Battlefield of today is very Call of Duty esque, and the other shooters like Halo, Destiny and others have emulated that as a formula. I would even say that the majority of shooters are simply 'CoD with a twist'.

I would like to reach the quality of CoD4 (and to a lesser extent, CoD2) regardless of all of these detrimental factors, and precedent. Call of Duty 4 was one of the few games including all modern (post 2010 titles), that had a well adjusted levelling up system. Even that supersedes all battle passes, etc that were derivatives of this particular game. As you can tell, this is more a criticism about the status quo, and a opposition to the 'know it all' adolescent nature of modern dev and critical feedback. It is fair game to be choosy, and unlike the majority of people, I have been keeping my ears open and analysing the opposite views.
I believe that we never grow up, have kept in touch with the old games, and still believe that opinion. It's very relative reactive series of hot takes, or indistinguishable to that.

A game that is too easy by design, and then too difficult is poorly constructed. But to each their own. On that topic, I like Ninja Gaiden because at least it is consistent difficulty wise but eh, then again I'm a fan of checkpoints.

I deeply admire the thought and effort fellow nerds put in while making Call of Duty 4, which created its subsequent legacy. It is a testament to the result of willpower and vision - The example of what you get for giving fans what they want. A lot of my most memorable experiences were thanks to these guys, even the last time I played local games with friends and family.

I'd be curious to see what kind of response this generates. Perhaps some counter movement to the hivemind of capitalism ad nauseum. A bunch of seeweller idiots that when put together play and work hard.


~DS
Chat to me on qTox or Guilded

* Regarding wages given to game developers. A country solely made up from gaming companies would largely be authoritarian: reviews that are paid-for, fake-hype and no game demos, and a lack of innovation accessible.

Well-known member
I make games and also write scripts on the rare occasion. Game dev for Us, Iberians.

Excellently written! I haven't played Call of Duty, though I totally understand your impression of today's gaming experience as it's changed with too much "grinding" as you try to reach a different level and less reward to get there. Blizzard has changed WoW so much that just when you think you have "arrived" they keep moving the bar, which I realize that's to keep you hooked and addicted, but that doesn't necessarily work for me, as it's back to the grind and less joy "in game" experience.

@Tiffany Excellent! Thanks very much. I was hoping the point of the article was apparent. WoW is a perfect example of what a fun RPG system is, and is by far superior thanks to a lot of trial and error.
Last edited: 20 Jan 2023

I play single and multiplayer and am comfortable with both modes of play, however, multiplayer is only with my friends. We've been playing Rainbow Six |Siege on and off since it came out in 2015 and also each CoD game as it came out too. I skipped the WW2 versions though, sticking to modern warfare ones instead. Although I'm normally a superior master race PC gamer, I bought a PS4 specifically to play R6 with them, great investment.

Playing online with friends is epic and I love the jokes and banter that goes with it.

I also really like the way modern technology allows people to come together like this from anywhere in the world, some of whom I know personally, others online only and don't even know what they look like, yet I now know them on some level.

The best part is that lag is very low, so while some friends are from south east England, one up north and another in Ireland, yet when we're all logged into the same voice party and game, we could well be sitting right next to each other. Lag might noticeable if one was in Australia though since the sheer distance from the UK adds a lot of unavoidable lag due to the speed of light limit. Yup, even though light is very fast, it can only go round the earth about 7 times per second, hence that lag. Doesn't seem so fast now, does it?

What It Takes to Make a Kinder, Gentler Video Game

Happy New Year 2023 plus your wish