Here is my A1200, I purchased this a few years ago pretty much in the state you see it below, minus the floppy drive which @RobA1200 kindly donated. 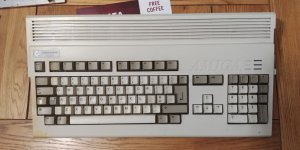 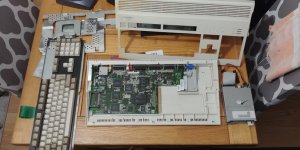 The case looks better in the photo than in person, there is some uneven yellowing on the left side of the case and keyboard. At some point screws that were too long have been inserting along the bottom edge causing the three bumps you can see in the photo. One thing to note, the whole machine came with a single screw holding the systemboard in, nothing else, no case screws. Also missing is the cable to connect the case LEDs to the systemboard.

When last tested the system did boot ok but I need to do a full test of everything. Hoping to do this next GCC meet. It's a 1D4 systemboard which I understand is one of the last Commodore made boards. The board itself looks clean and in good condition. Assuming all tests ok, next step is to get it recapped.

My plan is to then install it in my Checkmate A1500 Plus. I backed the case on the original kickstarter and kept flip flopping between installing an A500 Plus or the A1200. Since the A1200 case is in poor condition and missing a number of small parts I've decided to go that route for now. The Checkmate will also allow plenty of space for upgrades. I'm not planning to utilise the original keyboard, my preference is to connect a modern mechanical board perhaps with the Amiga style key caps that Stephen Jones has produced.

As for upgrades, beyond sorting a USB keyboard adapter this is more or less a blank canvas. I don't have much history with the Amiga so it will very much be a learning experience. With this in mind I would be aiming for a couple of upgrades to bring it up to a standard where it's convenient to use in today's world such as a Compact Flash card for storage in place of a HDD and maybe an upgrade to get a HDMI output. An accelerator is on the cards but I need to get familiar with the system and fully understand what an accelerator will enable the system to do over stock before choosing one and taking the plunge as none of them are cheap!

Lots of things to think about, first step is to check the thing actually works and the above isn't a moot point. I'll report back how this goes. Any suggestions for basic quality of life upgrades would be appreciated.

A1200 is my fav Amiga model so I can't wait to see how your checkmate transplant goes.

Looking forward to watching this one progress and find its way into the Checkpoint case.

A few things to note. Whether you want to use a USB keyboard or repurpose the 1200’s keyboard, you will need to fit a Sum1200 USB keyboard adapter. This presses onto the chip next to the 1200 keyboard ribbon cable connector and adds a regular USB connector as well as running its own USB HID stack. With that fitted, you won’t be able to fit an Indivision AGA Mk3 scandoubler (which has HDMI output with sound). If you can find one, an Indivision AGA Mk2 will fit, but the output is DVI (which can be gender changed to HDMI) without in-line audio. The Scanplus AGA will also fit alongside the Sum1200, but the output is VGA only.

If you fit a Vampire V4 1200 card, that of course has HDMI output and RTG. However, it’s going to be in the region of £500, so may well not be an option/complete overkill.

chrisgreen said:
Looking forward to watching this one progress and find its way into the Checkpoint case.

A few things to note. Whether you want to use a USB keyboard or repurpose the 1200’s keyboard, you will need to fit a Sum1200 USB keyboard adapter. This presses onto the chip next to the 1200 keyboard ribbon cable connector and adds a regular USB connector as well as running its own USB HID stack. With that fitted, you won’t be able to fit an Indivision AGA Mk3 scandoubler (which has HDMI output with sound). If you can find one, an Indivision AGA Mk2 will fit, but the output is DVI (which can be gender changed to HDMI) without in-line audio. The Scanplus AGA will also fit alongside the Sum1200, but the output is VGA only.

If you fit a Vampire V4 1200 card, that of course has HDMI output and RTG. However, it’s going to be in the region of £500, so may well not be an option/complete overkill.
Click to expand...

Yes I do have a dilemma there, the Vampire is probably a bit expensive for me. I did see this as a possible alternative keyboard adapter, it seems to use a different chip in the A1200 to the AGA Mk3. It does only support PS/2 compatible keyboards but I can probably live with that.

connect a PS2 keyboard to your Amiga
icomp.de

Yeah, the Lyra is limited to PS/2 and still sits on top of the same chip, so clashes with the Indivision Aga MK3. Personally, I would suggest going for the Scanplus AGA (or a used Indivision Mk2 if you really need flickerfixing), and then trying a VGA to HDMI adapter like this: https://www.amazon.co.uk/VENTION-Converter-Adapter-Digital-Projector-black/dp/B07F7WYGHV

Have done a bit of digging on the Lyra 3. While the SUM1200 uses U7 (highlighted green). As far as I can tell the Lyra uses the keyboard controller chip U13 (highlighted red).

Surprisingly there isn't a whole lot of info online about this (unless I'm missing the obvious, wouldn't be the first time 😅), I thought it would come up more often especially with the number of Checkmate builds out there now.

Here is an A1200 with the Indivision Mk3 installed. 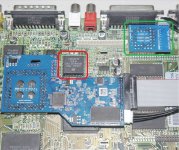 There is a mini update on the 1200. With assistance from @chrisgreen last club meet we have been able to run a comprehensive set of diagnostics and the Amiga has a clean bill of health. This was a relief for me, while I knew the machine booted when last tested it’s nice to have that piece of mind there are no major underlying issues before I start my build.

There are a couple of items that need attention first though. The all important recap which is next on the to do list. The IDE header also seems to have lifted slightly (suspect dry joint) so I’ll be looking to get that replaced. Finally the keyboard membrane is going a bit but I still plan to use a new keyboard with the checkmate so this is not so much of an issue at this time.

Final bits to do are removal of the RF modulator which is mostly redundant these days especially on an Amiga. Also removal of some of the filter caps which can cause stability problems on a 1D4 revision motherboard if the Amiga is accelerated. I’ll ask that all this is done when I send the machine off for recapping.

In the meantime I’ll begin prepping the Checkmate case and making sure I’ve got all the parts I need to proceed with the build.

I pulled out the Checkmate A1500 Plus case today and started some of the prep work for my build. 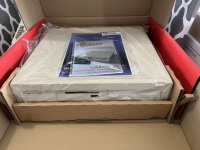 First thing to do was change the case backplate from the preinstalled A500 one to the A600 / A1200 backplate. Second task was to remove the preinstalled A500 Zorro expansion board. I ordered the case with both options originally as I wasn't sure whether I would go the A500 or A1200 route. I do have a second black case which I originally ordered with the intent to use for a PC build but decided there are a few too many limitations around component selection. I may well be temped in to using that one for an A500 build with a CDTV esque black aesthetic after all, I just really like the idea of putting original Amiga hardware in these cases, but that's a project for another day, back to the A1200 build... 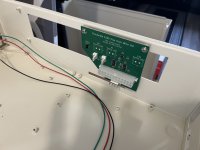 Next up I wanted to do a trial fit of the A1200 motherboard, firstly to get the motherboard standoffs in the right holes and also to get a feel for how it all looks in the case. 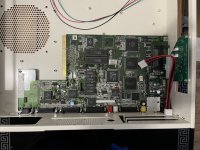 With everything looking good, I removed the board and have that put to one side now to be sent off for recapping. Next I decided to install the Amiga floppy drive. Thinking this would be straightforward I got it screwed in to the relevant mounting plate in the case and then found it sat way to low and didn't properly line up with the slot on the front of the case. I didn't get a good photo but note the drive mounts on a horizontal plate using the holes on the underside of the drive. You can just about make the plate out in this photo through the PSU hole. 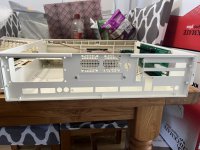 Here is the issue, you may think it looks ok but this disk has actually been ejected so should line up with the slot and come out freely. 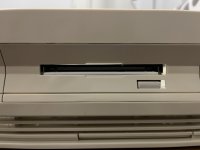 I was about to go on the hunt for some washers to raise the drive when I remembered reading about someone else having a similar experience some time back. They actually found the spare motherboard standoffs ideal to lift the drive to the perfect height. So I installed the standoffs between the drive and the mounting plate and here is the result. Looking much better 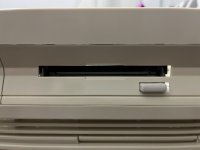 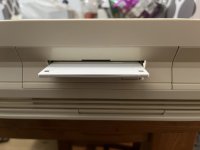 The next step is to do some shopping, I need a suitable SFX power supply. Stephen Jones actually sells one now that is rated to deal with the lower power draw of an Amiga. I think some people were finding certain power supplies cut off because they didn't even detect the Amiga as a load. Bear in mind an unexpanded A1200 only draws around 10 watts.

Amiga OS 3.2 along with the 3.2 ROMs have also been recommended to me as an initial upgrade to provide some quality of life improvements. The stock kickstart 3.0 ROMs are currently installed.