So, as I mentioned on WhatsApp, I've ordered a Vampire V4 Standalone in order to finally scratch my Amiga itch properly. I just can't bring myself to spend truly insane money trying to rebuild what I had before, and while emulation is OK, it's often fiddly and feels more like you are playing a video than running an actual computer. Being FPGA based like my Spectrum Next, N-Go and Ultimate 64 Elite, I'm hopeful for a more realistic big-box Amiga experience, with extra bells and whistles on top of it (like the other FPGA machines), rather than them compromising the experience (like emulation often does).

Meet Apollo Accelerators - the best line of CPU cards for Amiga computers. Discover V1200 V2, a new CPU Accelerator for AMIGA A1200 with 128MB RAM and built-in RTG. Excellent Apollo 600 V2 will bring your Amiga 600 to the NG level of performance thanks to latest 68080 processor. We also offer... 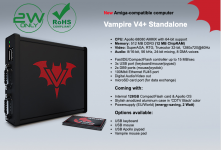 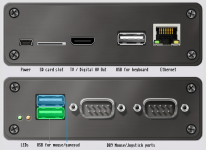 Bit of a shaky start - got the invoice through from Apollo this morning and they completely ignored my order and invoiced for the top-tier Ultimate Fan bundle (which includes a German QWERTZ keyboard - don't want that, a polo shirt - even in the biggest size probably won't fit, a baseball cap - I hate wearing caps and hats). I asked for the Light bundle, which is the Vampire, CF card, power supply, USB joypad, USB mouse, mousemat (meh - may as well). I will supply my own keyboard in proper UK or US layout.

Also in the process of emailing Steve Jones at iMica to ask him to change my Checkmate 1500 Mini order (replacing the Pi4 fitting kit with the Vampire one). The other thing I have concluded is that it's definitely pointless putting a Pi in such a case, especially when the Argon One v2 case really is the best Pi 4 case out there. So keeping the Pi in that case, and will use the Checkmate for the Vampire to give it that Amiga big box look and feel, albeit in black rather than beige.

very nice mate. saw neil fitting his into the checkmate. have you decided what os you're going for first? coffin os?

will be interesting to see differences between V2 and V4...

The networking stack is whatever is in AROS. However, I've also ordered the AmigaOS 3.2 CD, as ideally I would rather run proper Workbench than the AROS version. But the nice thing is I can just make up a second CF card for AmigaOS, rather than nuking the AROS build it ships with.

Am very much looking forward to it in the CheckMate 1500 Mini case, and seeing what the possiblities are for all that free space
G

This looks like a very good bit of kit. Could you tell me would this be a better option then maybe putting a Vampire in say a Amiga 600 or 500 with doing the odd on mods to them systems ?

GCC said:
This looks like a very good bit of kit. Could you tell me would this be a better option then maybe putting a Vampire in say a Amiga 600 or 500 with doing the odd on mods to them systems ?
Click to expand...

The standalone Vampire is slightly different to the accelerator upgrade versions for the 500, 600 and 1200. The accelerators are in some respects held back by the legacy hardware, chipsets and motherboards they are connected to. The standalone has none of those bottlenecks and is free to deliver an AGA experience with no memory bottlenecks, combined RTG and native video output, all the chips replicated in the FPGA. The cost of the standalone is about the same as the accelerator card versions. And you already have USB mouse and keyboard support natively on the device (costly mods to make on original hardware).

Sure, it doesn’t look like an Amiga as-is, but putting it into the Checkmate case will soon fix that.

As the Vampire comes in quite a flimsy card (not cardboard) box, using that for storage and transport isn’t going to be an ideal solution, especially if I start bringing it to the club, RetCon etc. So - picked up a cheap flight case with cubed foam and built a home for it: 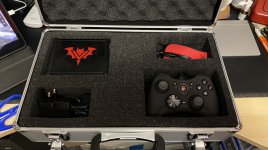 The case was just the right size for the Vampire, it USB game pad, mouse and power supply. I’m going to take a final piece out in the middle for cables and add a couple of slots for SD cards.

I already have a carry case for the keyboard I’m going to use when not at home. 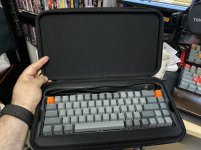 Yes, the Keychron keyboards seem to behave very well with the Vampire when using a USB cable (no Bluetooth support on the Vampire). Even the lights work. 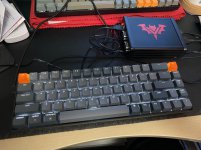 This isn't what we were expecting