No, I promise, we haven't warped back to April 1st, this is an actual thing. Following on from crossovers with Star Wars, Back to the Future, Top Gun and X-Men, we have Jurassic Park X TransFormers, in which the (broadly excellent) new version of Beast Wars Megatron gets a more 'realistic' paint job, a new head and a new name...

...only to be packaged with something that looks like a pound shop knockoff, or the sort of transforming robot toy you could find in the London Zoo gift shop: 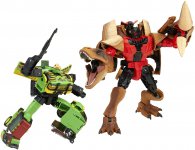 Currently looks as though it may be an Amazon exclusive in the States - which will mean it'll soon disappear from their listings, and its UK release will be repeatedly delayed - and is due for release in early November, at a whopping $105. Assuming a UK release even happens, that'll translate as £105, if not more...

I kinda like the T-Rex - its robot colourscheme is a homage to the G1 Dinobots - but not so much that I'd pay that sort of money for the set.

HEXdidnt said:
Currently looks as though it may be an Amazon exclusive in the States - which will mean it'll soon disappear from their listings, and its UK release will be repeatedly delayed
Click to expand...

It's stuff like this that makes these things worth a small fortune for collectors 20 years down the line, as hardly anyone bought them and those that were have likely been broken and discarded by then.

Retro said:
It's stuff like this that makes these things worth a small fortune for collectors 20 years down the line, as hardly anyone bought them and those that were have likely been broken and discarded by then.
Click to expand...

Particularly considering the increased fragility and prevalence of QC issues since they shifted their manufacturing to Vietnam (around the time Trump was applying tariffs to anything coming from China) and started thinning down and further hollowing out many of the component parts. Translucent plastic parts have been crumbling straight out of the box for some folks, but just about anything with a pinned joint these days has the potential to crack after a few transformations. Joints without pins have an increased tendency to pop apart or, in some cases, actually break.

It'd be nice to think that collecting contemporary figures is as much of an investment as some of the older stuff, but I don't think the secondary market is necessarily going to be as kind to figures produced after, say, 2010. I've seen many that increase in 'value' to a ridiculous degree when they become scarce or once their wave is no longer commonly available while still being current, but then crash back closer to normal soon after.

Plus, these exclusives as such niche products, there's a fairly small subset of fans who will be interested in them now, and I'm not sure I believe fans of the other properties would be won over by an iconic vehicle (or beast) toy that also transforms into a robot, especially when the non-transforming versions are invariably better made and better painted...

...Though that's coming from a guy who bought the two twin-packs of TransFormers painted up to resemble Street Fighter II characters, so I guess take that with a pinch of salt..?

This has now gone up on Amazon UK, for the positively eye-watering price of £125, with an expected release date of 1st December (so it'll probably arrive around March 2022). £105 would have been about £20-30 too much, even for an exclusive, and even given the currently prices in the main toyline...

vote with your wallet!