While I'm primarily a TransFormers collector, I'm also a self-styled "Femme-Bot Fanatic", since discovering the beautiful chrome android artwork of Hajime Sorayama (website) used in advertisements in the pages of computer magazines in the 1980s. One of my all-time favourites is Walter Schulze-Mittendorff's awesome Maschinenmensch design from Metropolis, which served as the inspiration for Ralph McQuarrie's original C3-PO concept art.

Since I don't follow action figures - even the specialist lines - with quite the same fervour as I have reserved for Hasbro's line of shape-shifting alien robots, Mezco's Reel Master/Silent Screamers line had completely passed me by. This little beauty came up for sale in a Facebook group recently, so - since both Courtney and I are fans of Fritz Lang's masterpiece - I snapped it up, and it arrived during the day of RetCon:

​
She's not a direct reproduction of the on-screen robot - it's very much embellished in terms of sculpt and paintwork - and, like many of these specialist 'collector' figures, she's a little lacking in the useful articulation department... But it's nevertheless a gorgeous figure.

Coming second hand, it lacks the display base - which the transparent tubes would have plugged into - but the throne is a nice addition to the set on its own.

The face appears to carry hints of the twitchy face of the false Maria the robot evolves into, seemingly based more on Brigitte Helm than the actual robot design, and the chest regions is... ahem... significantly enhanced versus the on-screen original: 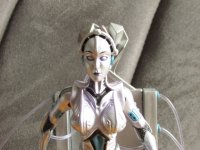 ​
If I had a gripe with the figure, it would be that the angled cut of the hip joints means that, while she can sit upon her throne, she is not... shall we say, as demure... as the original?:

​
Having looked into the line briefly this morning, I was thrilled to learn that the Art Director for this line was none other than Sandy Collora, who worked in movie special effects (of the practical kind) at Stan Winston Studios, before setting up his own studio and creating the 2003 short film Batman: Dead End, which featured the late Andrew Koenig (son of Star Trek legend Walter) putting in an excellent (albeit brief) performance as the Joker.
You must log in or register to reply here.