For those not familiar, NaNoWriMo - National November Writing Month - is a mostly self-led exercise in writing a novel. Most people say they've thought about it but 'never had the time'. Well, NaNoWriMo is as much about making the time as anything else.

The goal is simple: write a novel in November. By which, starting from midnight local time 1st November, until 11:59pm local time 30th November, write 50,000 words. The aim is to write, not edit, to just get it down.

It is, as I said, entirely self led - there is a website full of people all doing the same thing, and it has badges and stuff as you go along, but you don't have to 'submit' anything, nor are there really prizes at the end (well, we'll come back to that), you don't even need to join anything, it's just you, your writing weapon of choice, 30 days, 50,000 words, go. And at the end, you could have a novel. It'll need editing, sure, but it's still one hell of an achievement, and not to be taken lightly.

Some people spend ages planning, others fly by the seat of their pants, some do something in the middle.

2017 I had a go, got about 3000 words in before I realised that my setup was neat enough but it had no journey. No compelling characters, it was a one beat note that was a gimmick. An interesting one, but nonetheless, a gimmick.
2018 I was recovering after being hospitalised in September.
2019 I was recovering from work burnout.
2020... I actually completed it the first time. A tale of detective noir style (ish) mystery with some time travel shenanigans. A few interesting characters. I walked in with a setup and a couple of character concepts and made the entire thing up as I went along, and it shows - it could do with some serious editing but I had fun and I still like how some of the scenes played out.
2021... I completed it again, though this time I started with a detailed plan and sort of ignored it but sort of stuck with it resulting in something that isn't great to read, is kinda dull and I'd love to go back and do again. Once more with feeling (and characters, and a plot I don't hate)
2022... well, we'll see.

I keep track of progress on the official site - nanowrimo.org - mostly because it has a place where I can put the number of words in and see my progress visually over time. 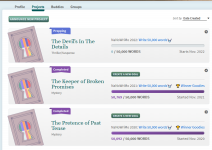 I did mention that there are sort of prizes; yes, there are the winners' t-shirts (not that I bought the NaNoWriMo 2020 or 2021 t-shirts, didn't like the designs), but you also get discount codes for writing/planning software, e.g. last couple of years have included things like half price licences for Scrivener, discounts on Plottr, Campfire Pro and the like. It's cheap PR for them to be involved as they're essentially not spending any money on the marketing and getting revenue out of it, with NaNoWriMo itself doing the marketing.

I'm looking forward to giving it a go but we'll see if it survives, I'm not sure about this year's story entry in terms of how much mileage there is in it.

Nice. It's been a while since I participated, and I forgot about it. I might get involved, as I'll be writing all month too.

How's progress on NanoWrimo? I've started several times but haven't found my knack yet. I might be doing a version in the next month.

It's not happening this year, a combination of work, and the fact that I hit the second act of the story and hit a 'now what?' moment, and I have no further 'what next' material in the tank.

Rediscovering a love for read-write culture