Many happy returns to Sonic, who turns 30 years old today.

In celebration, I just wanted to reminisce about the Summer of '91 when my cool, rich mate up the road got his Mega Drive on launch day (pretty sure it was July, not June, as we'd just broken up from school for the summer holiday).

Sonic was the bundled cartridge and we were both blown away by the graphics, sound and playability on his huge 24" living room telly and fighting over who was better suited to dealing with Robotnik...

That was the moment that Nintendo was abandoned (barring a few flings with GameBoys over the years) and the Great Schism began... taking me down the Sega path that eventually led to Xbox.

Anyone else got memories of their first Sonic experience?

Oh wow... See, the whole SNES vs. Megadrive thing completely passed me by as I was focussed on the SAM Coupé and, later, the Amiga... My own first experience of Sonic was on the Saturn via Sonic Jam, but I've barely played any of what's on there in all the years I've owned it. That kind of game just isn't my thing...

...However, I'm a sucker for special anniversary editions of anything, and your post reminded me that I'd picked up some kind of Sonic Anniversary boxed set back in the day, so I pulled it down off its shelf: 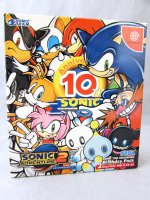 Where has the time gone?

...And I've never played the game because I've never owned a Dreamcast, let alone a region-unlocked one. I may have skipped through the soundtrack (great music but, again, not my thing), but I like the little commemorative coin and the history booklet.

Probably the only Sonic game I've played more than just a couple of times is Sonic R, partly because of its infectiously upbeat music, and I know it's Not A Real Sonic Game, and not even a particularly good racing game on the Saturn... but it's technically accomplished and kind of fun in 2-player mode...

Sonic Mania is currently Free on the Epic Store.
details here: https://greenfordcomputer.club/threads/free-game-of-the-week-mega-thread.30/post-173
You must log in or register to reply here.