Check out my first post in the thread here for an intro to this - https://greenfordcomputer.club/threads/the-three-amigas-numero-uno.261/

I decided to turn my attention to the second Amiga 500 on my list, the A500 Plus. I already knew this needed more attention than my KS1.2 A500. With that machine in a good place, I'm actually typing this post from it indirectly. I stripped, cleaned and assessed which parts were needed to get the A500+ in serviceable condition. Here it is: 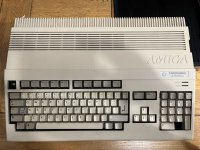 Before anyone panics, the first thing I did to this machine a few years ago when I got it was to de-solder the Varta battery. It had leaked but not too severely and the machine is fully functional otherwise as far as I can tell. I ran the Amiga Test Kit diagnostics and all passes ok. One thing that doesn't work is the floppy LED, the LED itself is physically cracked, the power LED is going the same way but still works at least. 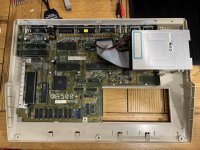 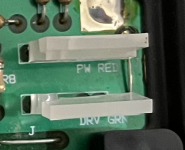 The other thing noticeable on first glance, a few keys are missing, I stole the ESC key for the KS1.2 A500 so the key stem is still intact. The decimal point / period key on the numeric keypad however has a damaged stem. The machine needed a good clean and wash, one of the previous owners got over excited with a pencil and had coloured in between some of the fins at the rear of the top cover as well as colouring the Amiga logo with some red Biro. Luckily IPA and some elbow grease took care of that. I also had to break out the Araldite epoxy again, there was some damage / splitting to the rear corner of the case. It wasn't hugely noticeable but I was worried something may catch it and cause further damage. Here is is pre repair: 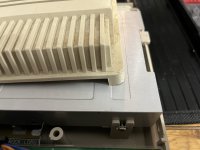 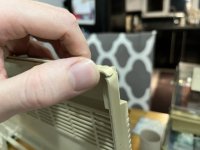 Here we are again pulling an Amiga keyboard to bits, before and after cleaning. 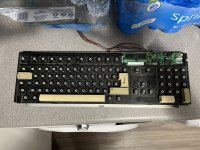 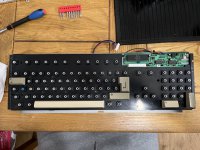 With plastics repaired, washed and keyboard keys stripped and cleaned I set about putting together my shopping list for replacement parts.

1) CR2032 replacement battery holder for the real time clock, this is the same one I used a few weeks ago for my A501 repair.

2) New ESC and Decimal point keys. Now I shopped a few times for a new escape key while I've had these machines, trying to find one isn't easy, it seems it's one of the most common keys to go missing. Nearly every seller on eBay that is doing individual key caps has usually already sold the escape key. I was lucky to track one down and added a decimal point key at the same time. I also ordered some replacement key stems and springs.

3) New floppy LED. The LED type used by Commodore is no longer available, if you have ever looked close it's actually two LEDs in a single package wired in series. I verified there was 5v supplied when the floppy was active so it should just be the LED itself that needs to be replaced. The closest replacement I have found and has been suggested online for a number of Commodore products is to use two modern LEDs side by side, the original is approx 15x2mm. I can get two 7x2mm LEDs which will hopefully do the job.

4) DF0 / DF1 Drive Selector. As you may have seen in my other thread, the part I bought didn't fit my KS1.2 A500, however fits perfectly in the A500+, so that is where it will live now. Have yet to fit the switch to the casing. 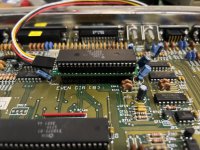 Assuming the repairs go well, I'll probably use the A500+ as my primary A500 class machine. Mainly due to the newer Kickstart and extra memory available off the bat. I know I've read a lot of games require KS1.2 / 1.3 so it will be interesting to see how this impacts when running on KS2.04. I do also have the A600 waiting to be fully tested but am rather liking the A500 at the moment. Dare I say it, I think the A500 is the best looking of the all in one type Amiga's despite the large table footprint. There are also a couple of nice, relatively cheap upgrades emerging for the A500 such as the PiStorm and RGB2HDMI.

I'm still waiting for a few parts but the new key stems turned up. I decided to get this job ticked off the list as it was a complete keyboard strip down from the rear to get access to remove the old broken key stem and assess if there was any further damage to the membrane. Worth mentioning the keys had all been reattached prior to doing this after they had been cleaned, otherwise if you turn the disassembled keyboard the right way up all your stems will fall out

I removed the keyboard controller circuit and disconnected the membrane connection (the large white connector). 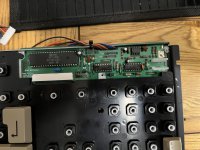 Then set about removing the many, many screws. 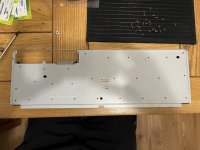 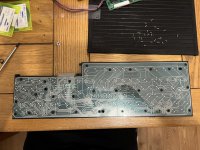 I carefully lifted the membrane to get at the key stems. 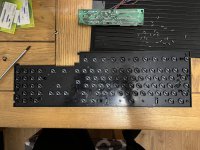 Here is the offending item, the old broken key stem for the decimal point / period key on the left and its replacement on the right. 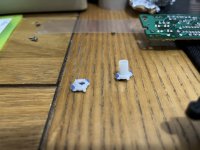 Reassembly is the reverse of disassembly. Take care to ensure all the screws are tightening evenly and nipped up but not so tight as to strip them. Here it is back on the Amiga: 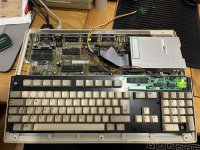 Success! All keys are now working and the membrane looks to have no damage. Just need the new key caps now. 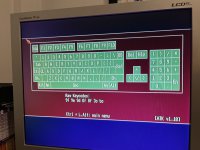