Since Wordle came along, I found a few sites that I do on and off that are in the same general vein - one a day, quick bites of puzzle goodness. I thought I'd share.

Quordle - same idea only this time you're doing 4 at the same time, as in you put in a guess for all four words simultaneously. You have a total of 9 guesses to guess all 4 words. But this also means that any guess for one will potentially help inform the others.

Duotrigordle - same idea again only this time, 32 at the same time with a total of 37 guesses to guess all 32 words. And of course, any guess for one will inform the rest.

Don't Wordle - 6 guesses to *not* guess the word of the day. The catch is that with each guess, any clues you get must be adhered to - e.g. if you put in 'QUICK' as a first word and you learn that I is in the middle spot, you *have* to use that in all your future guesses.

And a couple of others that I do less, mostly because I don't know what they're referencing...

Framed - film time! You're given up to 6 guesses with pictures from films, and guess the film. I find this pretty hit or miss if I've seen it (or seen promotional shots from which I can recognise it)

Heardle - play the first few seconds of a song (going up to I think 16 seconds over the 6 guesses) and name the song. I find this even more hit or miss than Framed because I simply don't know the songs. I think I've identified 3 or 4 total in the few weeks I tried it. (Of course, April Fool's Day was Rick Astley.)
I

Nerdle and I don't get on, something about trying to get my brain into mathematics forms just doesn't play nice. But Absurdle is fun, thanks for sharing!

There's also Colordle - https://colordle.com/ - where you need to match up the 6-digit hex code of a colour.

That was hard!! I suppose I only guessed one right, the 7? 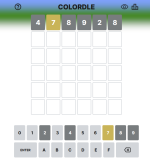 If it helps, you're trying to match the blue at the top of the screen, and your guess is a mid-green.

If it helps, you're trying to match the blue at the top of the screen, and your guess is a mid-green.
Click to expand...

I'll give it another try now that I have an idea of my goal. Thank you!!

I originally did this for Octordle but found it worked well on Quordle and even Wordle, if you don't mind it eating through 4 guesses.

Your first four words should always be:

This gets out all the vowels, plus Y and CK. It leaves Q, Z (not used much) and B H and V which however should be obvious by their absence if nothing else fits. On Quordle and Octordle be sure to complete the obvious ones first as this helps with the obscure ones by giving more letter placements to rule out. You will often see anagrams of your word:

From today's Quordle for example (I will wrap in a spoiler): 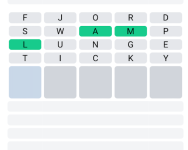 This has to be LLAMA as the unused letters won't fit anywhere. 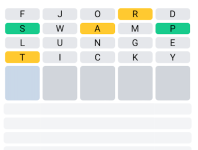 This is an anagram of STARP (ie. STRAP)

I always start with STEAM, PROUD, CLING - been a pretty good strategy for Wordle, Quordle and Duotrigordle for me. It's mostly Kilordle where this is a bad idea.

WordleBot 2.0 Is a Game-Changer for Wordle Fans

The New York Times WordleBot will take your Wordle game to the next level. We explain the tool's new upgrades.

From the vaults: Execution II - Revenge of the Guillotine