Most people know that there's no difference in picture and sound quality between cheap and expensive HDMI cables. However, some still cling to the idea, misled by marketing people and so called "Hi-Fi" magazines who want to sell overpriced cables. We're talking something like £100 for a 1m cable, which is insane. It should cost no more than £2 or £3. Longer cables no more than £5 to £10.

The reason that there's no difference, of course, is because the signal is digital, ie those glorious ones and zeros that digital equipment uses. Another thing to realise is that the cable itself is no more "digital" than any other cable, such as a mains cable. It's just wires.

This article does a great job of exploding the myth and goes into a lot of detail into why there's no difference. They also do some objective testing to prove the point. 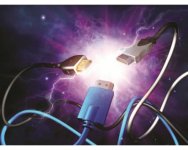 Expensive HDMI cables make no difference and here's why

Comprehensive, proper testing answers the question once and for all

Here's a somewhat related article that I wrote some time ago:

It might surprise you, but there's no such thing as an analog output from a digital computer. The output remains digital, no matter what. This might seem a strange thing to say when there are things like an "analog" audio port on a sound card for connecting to analog speakers, or an "analog"...

They removed the charger for our benefit? Really?

[UPDATED] The 12VHPWR cable is DANGEROUS! But NVIDIA doesn't agree...