RULES​
If you have any questions about this competition, then please ask them here:

I will be happy to answer any of your questions regarding Competition01.

What is your favourite animal?


Mine? well, once it was the Lion, then the Harpy eagle, then the Elephant, oh and what about the little Quolls?
and the Wolf, just listen to that lonesome howl...but then when I watch programs about predators hunting, why do I seem to root for the prey?

If someone was to make the statement 'I always lie', would you believe them?

Geffers said:
If someone was to make the statement 'I always lie', would you believe them?

Nice. That's the same paradox as "this statement is false".

Retro said:
Nice. That's the same paradox as "this statement is false".

Which reminds me of something I read: "A riddle. A man sets out to fail, and he succeeds. So what did he do, fail or succeed?"

It seems there is a whole gamut of this type of ambiguities. It is a play on words, open to interpretation, like "is the glass 1/2 full or 1/2 empty", when in reality it is both, of course.
A bit like the qubit, here there and everywhere; see you catch it if you can....

Mars said:
What is your favourite animal?


Mine? well, once it was the Lion, then the Harpy eagle, then the Elephant, oh and what about the little Quolls?
and the Wolf, just listen to that lonesome howl...but then when I watch programs about predators hunting, why do I seem to root for the prey?

Oh cats, cats easily. Especially when they show their clear superiority over mankind, like this one: 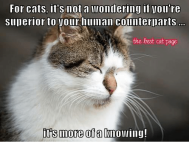 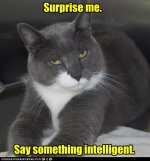 Mars said:
Which reminds me of something I read: "A riddle. A man sets out to fail, and he succeeds. So what did he do, fail or succeed?"

It seems there is a whole gamut of this type of ambiguities. It is a play on words, open to interpretation, like "is the glass 1/2 full or 1/2 empty", when in reality it is both, of course.
A bit like the qubit, here there and everywhere; see you catch it if you can....
Click to expand...

Oh yes, there's a whole raft of glorious contradictions like this in science. Great way to get a headache trying to figure them out!

Demonstrating that multiple sequential posts are allowed in this thread.

You can just keep going!
M

Retro said:
Oh cats, cats easily. Especially when they show their clear superiority over mankind, like this one:
Click to expand...

Cats....once worshipped as Gods, they have never forgotten it. And when we forget their glorious past, they soon let us know.

But jokes apart, after all, they are small animals and individuals vary in character.

One thing is for sure, they will let you know when you make a pest of yourself; they usually start with a hiss, some proceed to go into a corner and hide, others pee on your bed....What I'm saying is they don't subscribe to 'suffer in silence'!

I have to admit I love their smallness and the cuteness that goes with it. But, just how does the world's apex predator manage to look so cute? And play Catch & Kill all the time so adorably?!

And oh yes, everything you get back from a cat is Subject to Approval. There's no daft unconditional love lol. The Deposit Method in your example goes a long way to keeping us humans in check and obedient.

Can oobleck stop a bullet?

Not quite a liquid, not quite a solid, oobleck is weird stuff. Try and guess in your mind before watching it and without Googling it.

Adding to the conversation on pets. This is my Champy Bear. He's a 3 year old Pom. He's always with me where ever I go and matter of fact he's also with me while I'm at the computer.

I love all animals and I'm a cat person myself. Here's a picture of an excessively cute kitten: 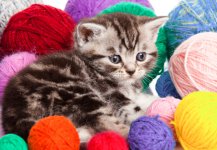 Oh...such a great pic! Totally captures this kitten at it's best!! Love cats too. I had two cats years ago, a black and white, I called Phantom, and a Ragdoll, named Ming. Sweet cats!!

After I posted the pic of my dog, I thought, jeez, I should have reduced the size, but hey, this kitten pic works...can't think of anything better then splattering our screens with total cuteness in a big way!!

Cuteness all the way, damn right! Don't worry about the picture size.

I think Phantom is a really cool name for a cat. Will keep that one in mind.

Phantom was all black except for the white paws....oh and I think his whiskers where white. He escaped one day after I took him to the vet. I posted signs everywhere and three months later, someone called and said they think they found my cat, which was in the neighborhood where I lost him from the vet's parking lot. Sure enough, it was Phantom. Couldn't believe it. He truly was a Phantom cat...lol

I'm so glad you got him back. We've permanently lost a couple and it was awful. This was all back in the 80s. Cats are indoor cats now whether they like it or not (Sandpaper is actually oblivious, bless him) and is nice and safe.

Oh, why Sandpaper? Because it's almost impossible to cuddle and fuss over him. Starting a fussing session makes him terribly happy at which point, he absolutely insists on licking my hand as part of bonding and there's nothing I can do to stop him! It's terribly cute of course and I just put up with my hand being sandpapered by that rough tongue of his. When it gets too painful, I just let him lick another part, or the other hand...

I can of course caress him with the other hand, but there are limitations when the other one is having the skin carefully and lovingly scraped off.

Animals are great, aren't they? Even with some of their annoying quirks....lol...Pom's are well known for the same form of expression, though minus the sandpaper effect....

Cute name for your fur-baby!

I'm sorry you have lost some fur-babies. It is terribly painful, they're family. I actually prefer my dogs to people, well that is the not-nice people. I have lost several of my pom's over the past few years, not exactly due to age, but due to a collapsed trachea condition. It's awful, and I won't detail it. The pom in the above picture has a minor condition of it already. It's heartbreaking. It's like the dog version of COPD.

Our family, lost Isabella, last March, 2021. Her color was parti, hence the flamed head and multi-colors. In Texas, in both February of 2021 and February of 2022, we had snowmageddon and icemageddon, respectively. We lost power for days both years; zero degree temps. Our Isabella was a cancer surviver but already a successful senior, but the cold was too much for her. She also had open heart surgery when she was a 6 month old puppy. She was an amazing dog and we miss her. Here's a pick from our snow storm in 2015. 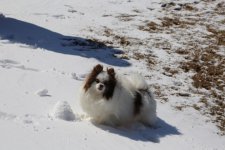 Animals are indeed great. I care very much about their welfare and I really hate to see cruelty to any animal of whatever species. In fact, in my Forum Rules, paragraphs 5.20 & 5.21, I explicitly ban people from expressing a pro hunting view on this forum. Sure, talk about it and the horrors of it, but don't big it up. I'm pretty tolerant and easygoing for many things on NZ, but someone wilfully breaking this rule would see another side of me.

And yes, losing them can hurt alright. After losing our first cat in 1989 to oldish age at 13 and sickness, I grieved for so long (many years, haven't fully stopped, really) that I now have a sort of mental shutter that comes down to minimise that horrible feeling of loss. That applies to losing people too and helps to keep me sane. It's an unfortunate fact of life that the longer one lives, the more people and animals die around them, so we must have some sort of psychological defense against this pain.

I'm so sorry about your Isabella. It must have been pretty frustrating to know that she could have lived had it not been for that power cut. I can see that she was a beautiful dog and no doubt with a beautiful personality to match.

I thought I replied to this; I must have replied to it in my head but failed to actually reply....sorry....I'm glad you have rules about not allowing any animal cruelty discussions or pictures. That gets me more then anything too. I'm always wanting to save animals and even humans that are neglected, harmed, made fun of or have disabilities they can't help.

I can relate to your grief too of losing your first cat in 1989. Even though I have some precious dogs now, I will never forget the family dogs before them and all the years of joy they brought in my life.

Shelling up in a protective barrier is also the way I keep myself from totally falling apart every time there's a loss. After I lost my Isabella, I told my husband I didn't want anymore dogs, that I was done and I couldn't go through the grief of losing more. Several months passed and he kept telling me that I should bring dogs back into our home. Enter, Champy Bear and Snowy Bear. Apparently, my husband has always wanted a Chihuahua and in particular a ChiChi that looked like the Taco Bell Chi (her real name was Gidget) from the 1990's commercials. Now we have a Gidget, ChiChi. She's 4 pounds and you would think every dog is the same, but they are really not. I grew used to have Pom's which are from the Spitz family (working dogs and herding dogs with traits that show up in how they react), but a Chi is totally different. The first time she balled up under a blanket I freaked out. Apparently, that's what they do, and they're master's at it. That's how they keep warm and stay comforted. My main challenges was determining if she was scared or she had blood sugar issues because she would be shaky. I've got all of that figured out too.

On keeping people at a distance so you don't get hurt, that's understandable as you get older too. My husband and I are much like that, though I did lose my lifetime best friend of a very senseless loss last November. I don't think I've really fully grieved from that, I've just stayed very angry at the hospital for their neglect.

With Isabella's loss, it was devastating. I did everything I could to save her. I brought her for IV fluid's daily, but she kept losing weight really fast. The cold house, was too hard on her and she was already not well at that time. This past winter, I almost lost my Snowy Bear. We lost power for 16 hours, nothing, nada power in the house and through part of the night, Snowy was on the other couch away from the fire and when I went to go check on him, he was ice cold and I couldn't get him to wake up, though I finally did. I wrapped him up in blankets and all of us huddled around the fire. You know, I can be really strong in the time of struggle an sacrifice, but there's just no excuse for power failures in Texas. So many lives were lost these past two very unusual winters and animals too.

My husband and I just organized a lot of family pictures over the weekend. It's time to splatter this thread with more fur-ball cuteness! 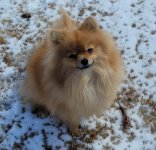 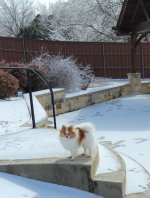