Kansas is an extremely red deep state, which is why this voting result carries weight for future red states to pay attention to.

Just keeps going from bad to worse. There are a lot of women on methotrexate for autoimmune diseases. Now these women are being denied this medication in states like Texas and other states with anti-abortion laws for those in your child bearing years because it may cause a spontaneous abortion. 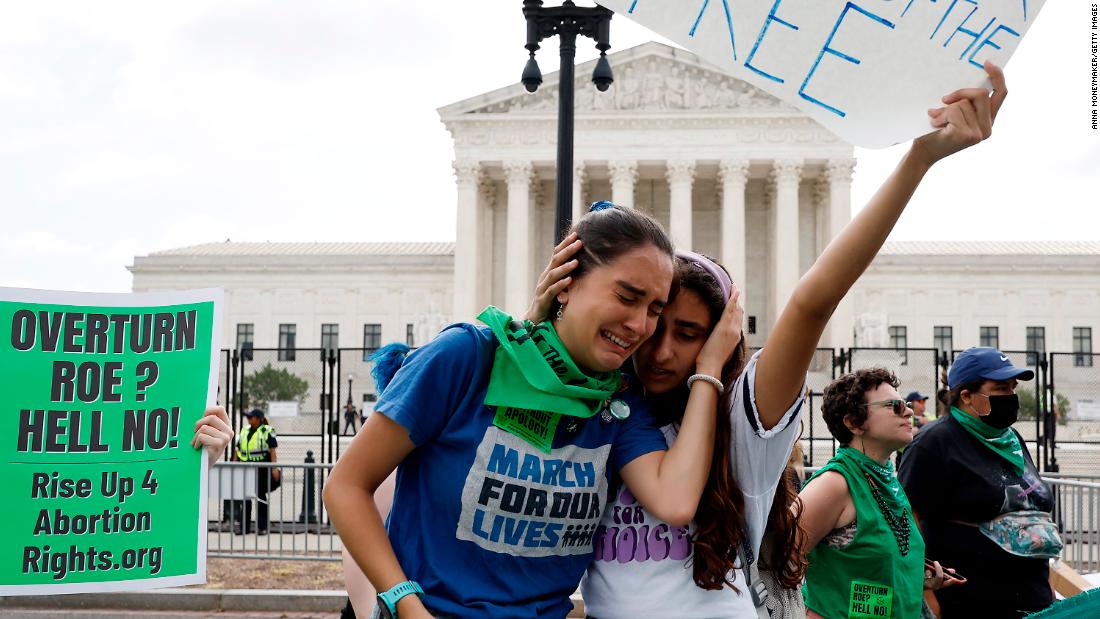 Not 24 hours after the US Supreme Court overturned Roe v. Wade last month, ending the right to an abortion in the United States, Myisha Malone-King got a call from her insurance company. It said that the medication she takes for a condition totally unrelated to abortion would no longer be...

I can't believe that this is happening in a democracy. It's fascism. Awful.

It is awful. America is suddenly this foreign place. We aren't exactly a democracy anymore because of the overuse and abuse of executive orders by any sitting President. If congress can't get along and the bill can't be passed through the house and senate, then the president just writes an executive order; another written today. Of course the order's can be reversed when the next sitting president arrives, but it's total chaos bordering on dictatorship. Our congress was meant to work by 60% votes. Both house and senate need to go back to hashing it out until they come up with a compromise. Now they pull a "nuclear option" to get bills passed through with less then 60% or use the VP as the 51 vote to break a tie. Democrats are all for eliminating the Filibuster too. There are reasons a lot of this was put in place two hundred years ago, to prevent a tyrannical government. Sorry, I'm grumpy and I'm really sick of what I'm seeing. Our previous governor, Rick Perry once said, " I want government to be less relative in your life". Now we feel like government is total intrusive. Interesting fact too, we are ranked a less free nation then the UK, if you look that up.
Last edited: 4 Aug 2022

We're learning from your example and trying to copy you...

Arantor said:
We're learning from your example and trying to copy you...
Click to expand...

Resistance is futile, however, there are a brave few that still try to speak up. It's breaking through the corrupt media that's also a challenge. I hope the UK doesn't succeed in pulling off the same charade as the US and your new PM, whoever that's going to be will have some kind of integrity.
M

Tiffany said:
.......Sorry, I'm grumpy and I'm really sick of what I'm seeing. Our previous governor, Rick Perry once said, " I want government to be less relative in your life". Now we feel like government is total intrusive. Interesting fact too, we are ranked a less free nation then the UK, if you look that up.
Click to expand...

Don't apologise Tiffany, I know exactly what you mean. Don't apologise for being 'grumpy', it is impossible to be wide-eyed and trusting when every day we witness corruption and deceit at the highest places.
And there is nothing we can do about it, except feel an overwhelming sense of frustration.

Tiffany said:
whoever that's going to be will have some kind of integrity.
Click to expand...

Sadly, that’s not a thing. One of the candidates is basically proposing to make criticising the country into hate speech, the other seems hell bent on trying to be a fusion of Thatcher and Johnson and already one of her flagship policies has gone through the announcement/U-turn/denial of details/claims of being misunderstood/other ministers defending it as misunderstood cycle.

Integrity is a foreign concept to them.

lol the tories and integrity in the same sentence. How droll.

I could rant.
M

Arantor said:
Sadly, that’s not a thing. One of the candidates is basically proposing to make criticising the country into hate speech, the other seems hell bent on trying to be a fusion of Thatcher and Johnson and already one of her flagship policies has gone through the announcement/U-turn/denial of details/claims of being misunderstood/other ministers defending it as misunderstood cycle.

Integrity is a foreign concept to them.
Click to expand...

Well said, sad but true. This is precisely what is going on in this country.
My offer to stick their heads in the bog and pull the chain stands.......Wishful thinking unfortunately; and that is precisely why it is so frustrating.

@Mars Exactly, couldn't have said it better. That's the way I feel too. I'm so burned out, sick of all the intrusive control, the nonsense and sensationalism of the news. A constant gut churning of negative information coming at you all of the time, even if you aren't trying to see it. There is so much corruption. Frustrated, yep, I'm frustrated to no end.

@Arantor When a country starts persecuting those for thought crimes, you know something is way wrong. People should have the right to not be threatened if they say something negative about their county; hate crimes, seriously. Neither of your candidates are palatable it looks like.

@Retro How does the labour party compare to the tories in terms of standards, reliability, integrity?

There was a time when I thought Labour were far more the party of reliability and integrity. I might even have given Corbyn the benefit of that view though with all the smear campaigns it's hard to know any more.

But here's the thing I would note: Corbyn, when you just see him talking, is an older man talking about kindness, decency, respect, the sort of thing that a leader should be talking about, with a decent dose of socialism - by the people, for the people, with a recognition that people are prepared to pay more in taxes to fund public services. This, of course, is utterly anathema to the cronyist capitalist shysters running the show, and the smear campaigns to discredit him are still running even though he is nowhere near power because they're *that* afraid of him.

I posit that the *relative lack* of such smear campaigns against Starmer are because he's like them, and that his presence as leader of the opposition is tolerated because he's no threat to them precisely because if push came to shove, he is one of them at least in their minds. I like to think he personally has more integrity than that, but it's honestly hard to say. What I do know, beyond speculation, is that it's impossible to really understand what the party stands for any more.

Labour used to be the real 'for the workers' party, the clue is in the name, and for a number of years they were what we would call pretty leftist. Which, compared to America is a very different situation; our centre is quite a bit further left already compared to where America sits. We have almost nothing of the hardcore libertarian right, and our conservative right has none of the rampant theocracy, at least in theory.

The 90s brought a very seismic change to our politics. At the dawn of the decade, Thatcher was in, the Eurosceptic movement was ramping up and her particular breed of selling off the nation's assets wasn't going down so well. Some manuevering happened and she was ousted and replaced with Major - a man so boring, Spitting Image's satirical take on him was to make his wax puppet grey and evangelise how wonderful the peas his wife cooked were. But a young upstart rose through the ranks of the Labour party - Tony Blair. (Spitting Image depicted *him* in a fluffy pink bunny suit bouncing back and forth singing 'I want to be the leader')

1997, the Tories lose to Labour in a landslide. Labour promises to invest in the country ("Education, Education, Education") and brings the message home that the Tories have messed things up pretty badly - their anthem was literally, "Things Can Only Get Better" by D:ream. Blair's government did make some sweeping reforms in their way, and there are many things one can blame them for (PFI is probably my most abiding thought on this subject) but a lot of people felt that this 'New Labour' was much more like the Tories than the 'Old Labour', and that's probably true - but Old Labour, as was, was hardly winning elections. They'd been out of power between 1979 and 1997 - clearly 'for the workers' as a message wasn't working.

I don't really care which of the current Tory candidates wins, they're both awful. The only small hope I have is that they pick Liz and she wrecks the party internally so hard that the Tories are unelectable for a decade. The reality is that what Cameron tried to prevent with the Brexit referendum (which was really the inner conflict of the Tory party between its more centrist/liberal faction and its harder-right faction) is now playing out on the big stage where both candidates know they need to keep their lunatic right on board while trying to not entirely alienate the moderates.

There are a lot of people rightfully pissed off that this situation is being decided by such a tiny minority of the country - the vote on next PM is down to the 160k Tory members. This should have gone to a general election - I even think under the circumstances an outgoing Labour PM would have made that happen, but Boris knows full well that if he actually called a GE, in the present climate the Tories would be decimated. This show is all about riding out the economic situation (hahah) until it settles down (hahahahhha) for which they will claim 'look at us we fixed it' and reinforce them getting a new victory next time in a GE.

Problem is there's enough people that will keep voting these fucks in.

Tiffany said:
@Retro How does the labour party compare to the tories in terms of standards, reliability, integrity?
Click to expand...

Well, Arantor's beaten me to it again

and given the standard super articulate reply.

From my point of view, they're better than the stinking tories, but that's because it's really hard not to be.

I can only hope that they finally get into power and fix some of the many, many problems that the tories have created with their extreme corruption.

Over the last 50 years or so, the country has voted tory almost the whole time so it's hard to say how it would have looked under Labour. What I do know is that I dreaded what would happen when Labour got into power in 1997, but when they left in 2010, I felt that they really hadn't done that badly. One thing's for sure, brexit wouldn't have happened under Labour, and that's massive.
Share:
Facebook Twitter Reddit Pinterest Tumblr WhatsApp Email Share Link
Top