I recently saw on TV the original Top Gun again in anticipation of this film. It was decent, with some good action scenes, but I thought a bit overrated.

30+ years in the making, I saw the sequel last night and I was very pleasantly surprised. I expected to like it, but it actually exceeded my expectations, which is unusual for a movie and especially so for a sequel. Decent plot and great action scenes really made it. Deserves its current 8.7 IMDB rating. Recommended.

I like most Tom Cruise movies as they're very well made. 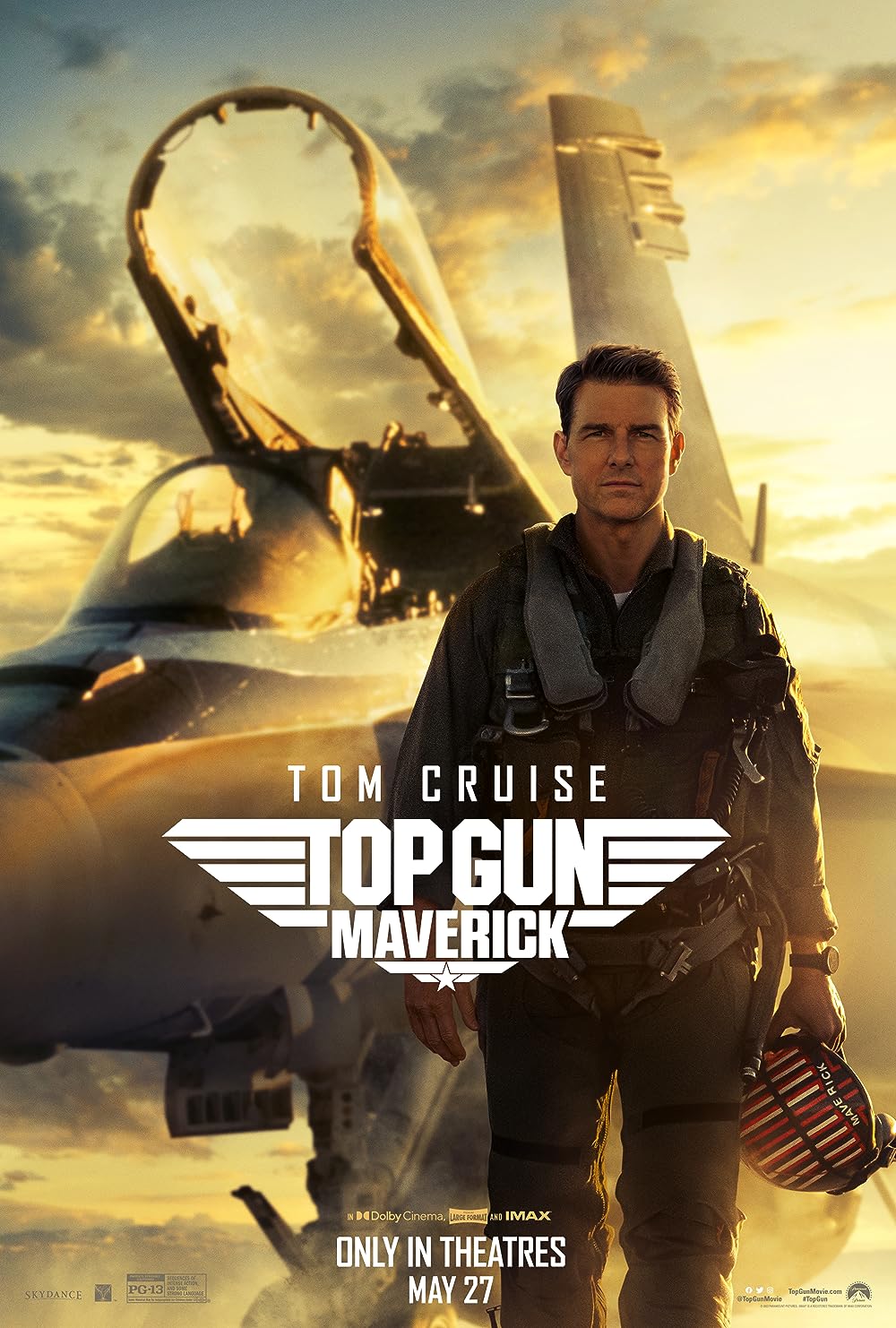 Top Gun: Maverick: Directed by Joseph Kosinski. With Tom Cruise, Val Kilmer, Miles Teller, Jennifer Connelly. After more than thirty years of service as one of the Navy's top aviators, Pete Mitchell is where he belongs, pushing the envelope as a courageous test pilot and dodging the advancement...

I've read some really good reviews on this movie. We like Tom Cruise movies too. He does so much of his own stunts and is a pilot too.

Yeah, I did wonder if he was flying those jets as the scenes looked pretty realistic. I get it could have been augmented by CGI though, I'll see if I can find out.

I have to be honest about this... I have no desire to go see it.

It's hard to explain why, though. I liked the original; I thought it was a good summer flick (though I didn't see it when it first came out, I was far too young), with sizzling action, a gut punch, a redemption arc and the final payoff. Solid film, solidly written, solidly executed. The opening is just on point for how to execute such a thing.

I guess I'm just... what could a sequel bring that wouldn't diminish the original? I think that could easily be an observation about a lot of what goes on in Hollywood these days.

Arantor said:
I have to be honest about this... I have no desire to go see it.
Click to expand...

<A shocked silence falls across the NerdZone universe>

But seriously if you ever do see it, perhaps when it's shown on TV, I think you'll like it. The film just got better as it went on. Really good.

From what I've read in reviews, as a sequel, it doesn't disappoint. I'm sure we will watch it when it comes out for "at home" Pay Per View. We haven't gone to movie theaters in years.

I don't think you're missing anything by not going to a theatre. It's an outdated way of watching movies.

Retro said:
I don't think you're missing anything by not going to a theatre. It's an outdated way of watching movies.
Click to expand...

Totally agree. There's an "ewww" factor for me in theater's too.

With surround sound, snacks and the pause button, an "at home" movie experience is the best!

I think it really depends on the movie and the theatre.

First up, I am not likely in my lifetime to afford a place big enough to have a decent viewing screen that's competitive with a theatre screen. I do love the idea of a *big* screen for taking up the whole of my visual perception (or close to it), though I could correctly set up a surround sound setup to sound *good* by getting the placements right, something I find not nearly enough people do well.

But secondly, I've had the joy of going to some films in my time where the collective reaction in the cinema can't be beaten. When Bohemian Rhapsody was new, our local indie cinema was hosting singalong screenings, something that you're just not going to be able to replicate in your own home.

I've been in cinema screenings where when events happened, there was a collective cheer, or a collective intake of breath. I've even been to screenings where the viewers stood up and gave the film a standing ovation at the end. There is a certain solidarity and shared experience there but I couldn't tell you which films garnered what reactions.

What I will say is that there are fewer and fewer films I'd *want* to see in the cinema. I haven't watched most of the MCU and I have no plans to because it just feels sterile and mass-produced at this point. Ditto the newer Star Wars content, all of it. It's increasingly devoid of a soul and increasingly deeply cynical about making money.

I don't know if that's just me getting older or whether there's a change in the films, but I remember going to the cinema as a kid and it being *an event*. There was excitement, build up and then boom, thoroughly entertained. I don't get that any more.

Arantor said:
I don't know if that's just me getting older or whether there's a change in the films, but I remember going to the cinema as a kid and it being *an event*. There was excitement, build up and then boom, thoroughly entertained. I don't get that any more.
Click to expand...

That about sums up the experience for me all those years ago.

A few years before the pandemic hit, at the badgering* of my friend who was a movie buff, I took out a Cineworld season ticket. For a couple of years I really enjoyed going. I'd just go by myself most of the time and give films a go that I wouldn't normally because of the cost each time, but with the season ticket they were free. Then, the bottom just fell out of it for me and I stopped subscribing. A lot of it was just there being less decent movies to watch and then I couldn't find the time to watch the ones that I was interested in.

Those experiences that you had sound very memorable.

*Well, he more or less frogmarched me to the sign-up terminal at our local cinema and got me to subscribe, lol. I'd been procrastinating over it for the longest time and we were about to watch a movie there, so a perfect time to get the season ticket. I'm glad he did too, as I got a lot of out it, especially in the beginning.

One Shot shot in one shot